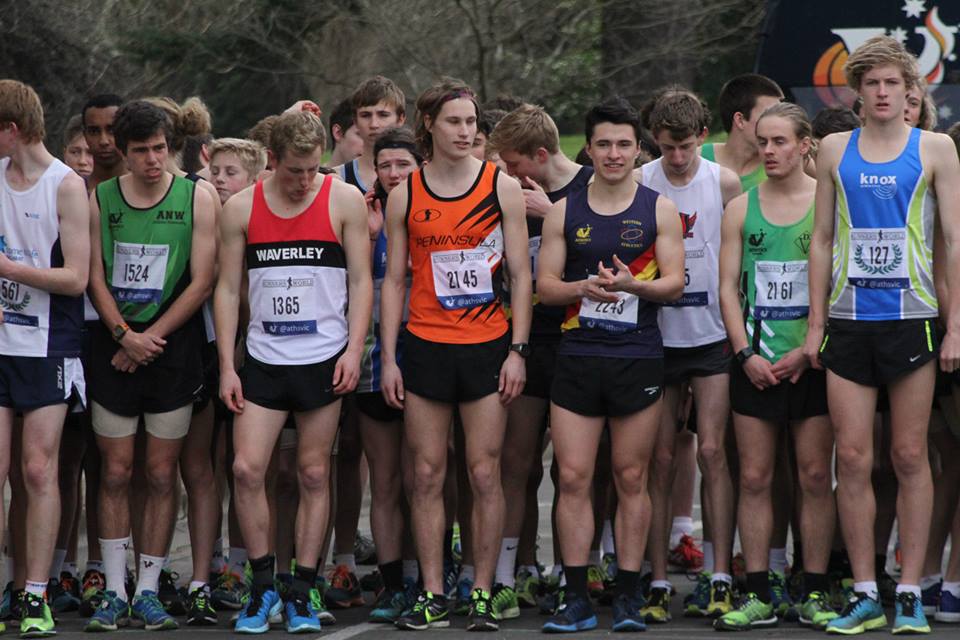 This week’s XCR round 7 at Lake Wendouree greeted us with a surprisingly chilly wind across the lake but at least no rain! We really struggled for numbers in our open men's and women’s ranks with only a mmen’s Div 2 and a Div 2 and Div 4 in the men’s. Thanks again to all those for running even though some were not at their best and it might be enough to keep our Div 4 in second place as the overall race numbers were down compared to other years. 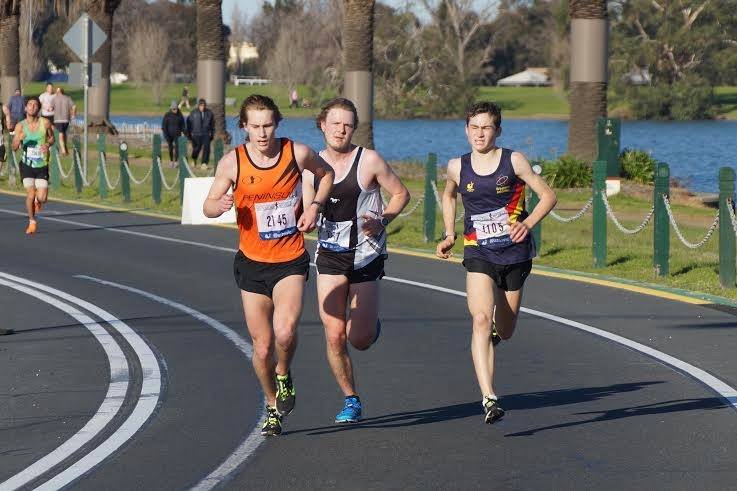 Daniel Dunstone recorded his first win in an AV race in Sunday’s U18 10km road race. He ran a superbly timed and measured race, holding a steady 3.15/km, gradually picking off all U18 athletes. At the 8km mark he caught the race leader, Mornington’s Troy McGill, where a duel for first place started. With one kilometer to go Daniel gently increased the pace which was enough to seal the victory, finishing in a time of 32 minutes and 53 seconds. 'with a k to go I increased the pace to 3.09/km then after a few hundred metres I heard Troy give out a groan and I knew I had him!!’, Daniel said. Well done Dan, nice 1km kick! 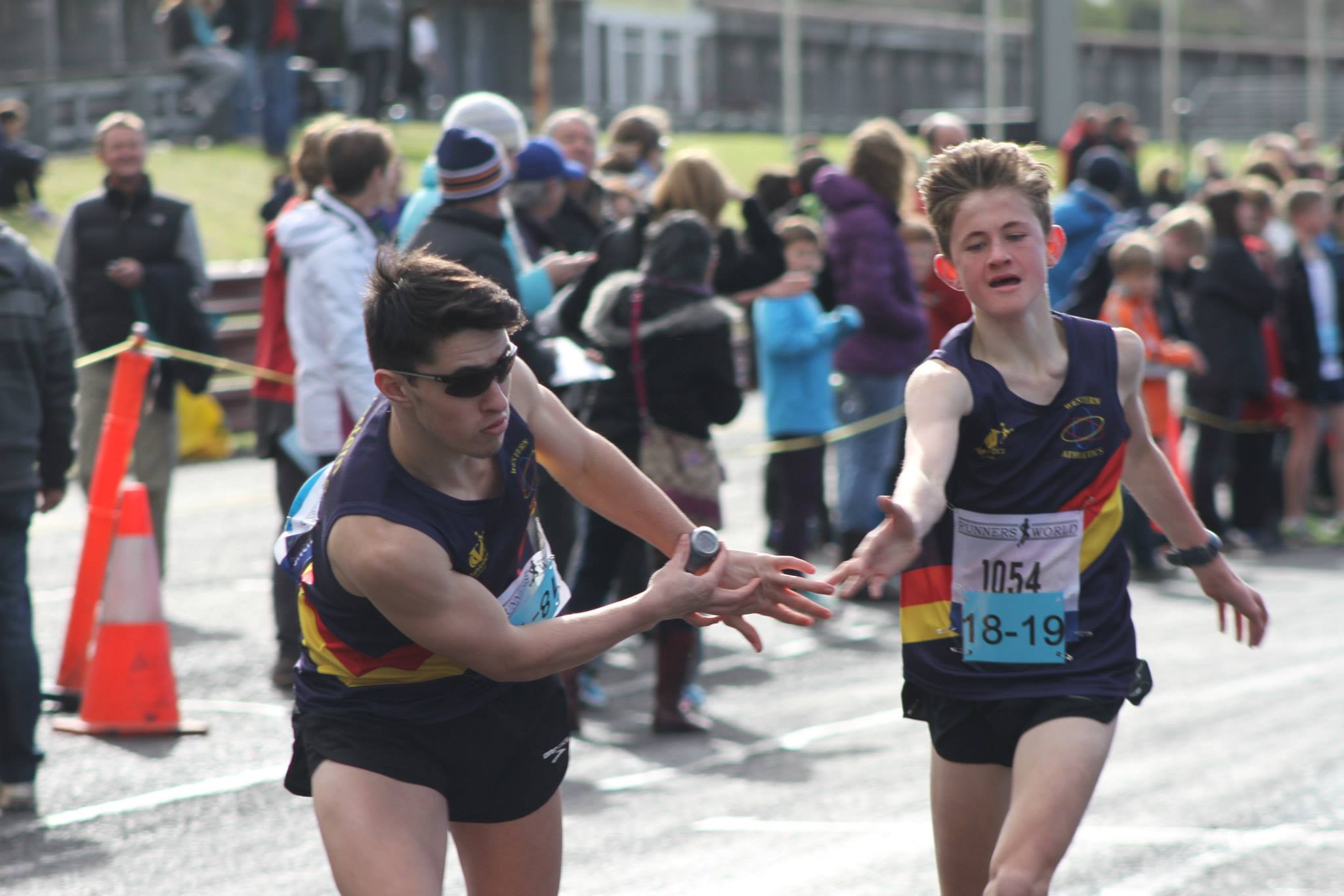 The day started with ominously dark clouds but at least for the most part the showers did not make life too difficult and we even had a brief appearance from the sun! There were some very solid performances and PBs across all age groups and again all our entered teams scored points, so well done to everyone for turning up and competing.  A big thanks to the spotters/time recorders and especially our three AV helpers, Sue Rebesco, Sharon Rankin and Julius Weitsz…Sandringham thanks you too!!

Some highlights from the day were the great performance from our Men’s Div 2 finishing second, despite losing 4 of our top athletes, the Men’s div 4 winning with the return of a couple of Western Aths greats, a surprise 4th place in the Women’s Div 2, and of course the Juniors’ two gold medals and two bronze medals.

Round 4 Bundoora was the last of the cross country races and for the open men and women arguably the toughest course with the big climb up the back of Mt Cooper, but we were lucky again with the weather. Not having too much rain the week before and nothing on the day resulted in a firm trail with just the final part of the circuit being nicely churned over and a little tricky to negotiate. Thanks to Mark Sharp for manning check point 4 on top of Mt Cooper for 4 hours in the freezing wind! 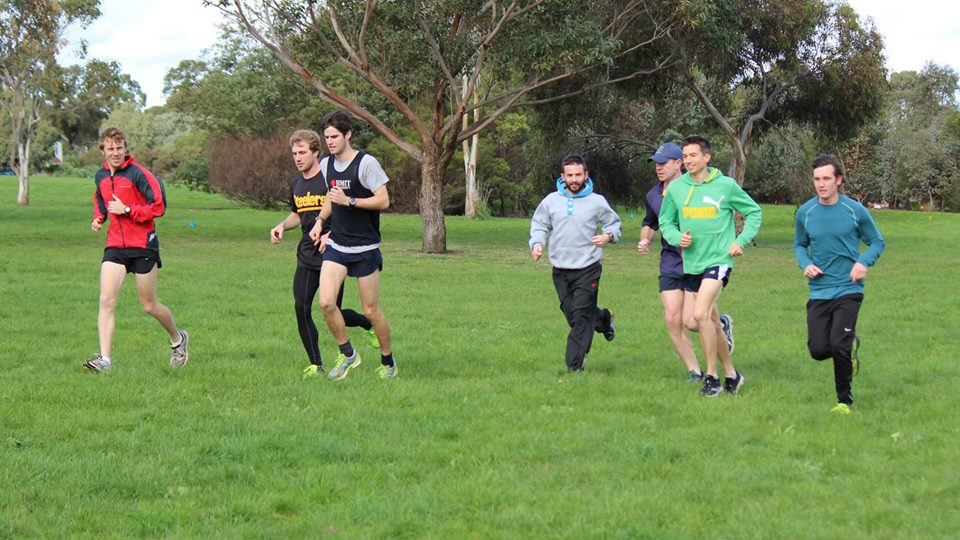 This week Rob Pope has continued his brilliant form and showed real class not only be the first of our Open Div 2 men but finishing in the top 40, 39th place overall.  Rob is at home in the longer races through the hills and this week ran two minutes faster than last year’s Brimbank race, completing the course in 58 minutes and 24 seconds – our fastest ever at Brimbank! 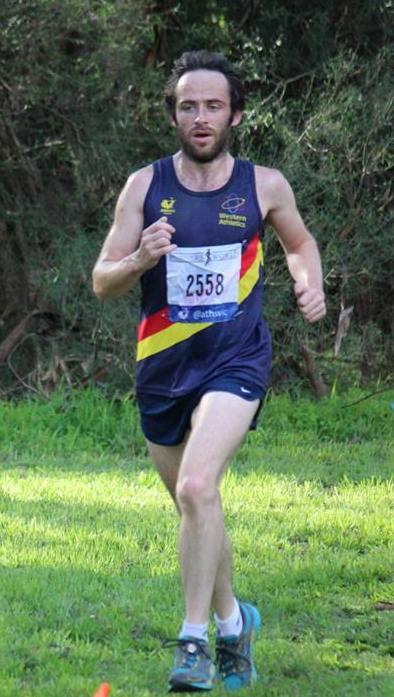 Thanks again to all those who made the trip to Lardner Park on Saturday to make it another memorable and fun event and special thanks to all those bringing afternoon tea, a feast for all!  We were blessed with the weather and as a result the course was quite fast, firm under foot and not too much mud in the ditches.  Regarding the ditches there were many ways to negotiate these; jumping, stepping side to side and the photo below shows Janice preparing to levitate across one! 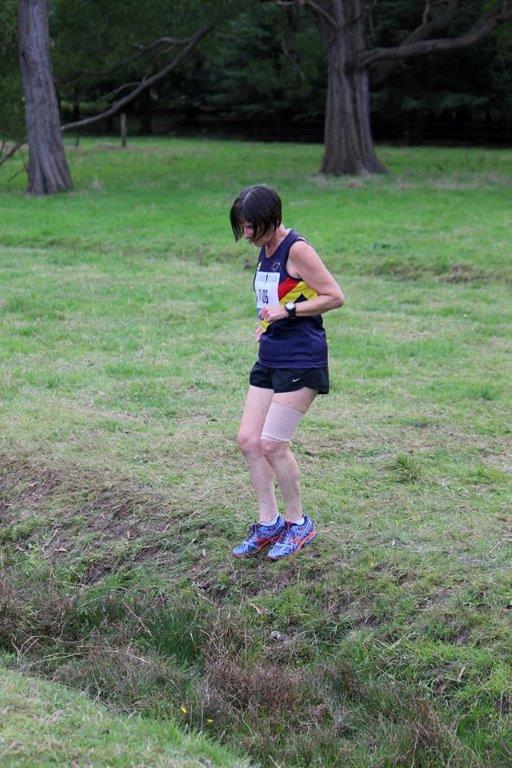 Looking back at last year’s results it was interesting to note that in this year’s races there were many more athletes, across the whole competition, especially in the juniors ranks. Most remarkable of all was the under 18 men’s with 50 athletes competing – a large competitive group.

Our senior men did well and had enough athletes to fill Div 2, 4 and 6.  Again it was Rob Pope, in great form from his huge London Marathon PB, first across the line in a time of 29.06, followed by Alistair McDonald, Chris Downie, Cam Menadue, Alex Tyrrell and Allan Cook. Congratulations to Spenser Beasley on his first competitive run with Western Athletics, he was smiling in the photos so hopefully we’ll see him at Brimbank!!  Also, some great results for our overage athletes with Alan Hammond in 2nd place in the 60+, and Allan Cook 5th and Colin Drake 10th in the 50-55 group.

In the senior women’s 4km our ladies struggled to get numbers this weekend but managed a Div 2 team with Carolyn Huell finishing first in a time of 16.17 (3rd in the 45 – 49 age group), followed by Mechelle Lane (7th in the 50-55 age group), Chelsea Morley and Jo Francken rounding out the div 2 team.

Best results of the day were from Matthew Hussey, showing his experience in controlling the race from the outset and planting his foot just at the right time to win the U14 2km race in a time of 7.03.  Next up, the 4km Men’s U20/U18 where Jack Rayner came in 2nd in 12.14, behind Ballarat’s Jack Davies and not far behind was Nathan Pearce in 6th with John Camilleri in 13th to complete the U20 team.  Our U18s, in a very strong field, did well to have Daniel Dunstone, Lochlan Lyness and Cody Shanahan in the top ten and the team will probably finish second behind the powerful Knox team.  In the Men’s U16 Christiaan Weitsz came 7th, Kirk Shanahan 11th and Thomas Rebesco in 14th, with the provisional results suggesting the team came 1st.

In the women’s U20 Claire Hodgart came 5th with Hayley Burke and Monique Harris completing the team and, from the provisional results, possibly the only team.  In the U14s Sophie McMinimee was 5th and Georgia Muller in 13th.

Junior ‘Run of the Day’

In this year’s XCR season, for our Junior Men’s and Women’s individual races, I am pleased to announce the ‘Run of the Day’ award.  The ‘Run of the Day’ will be awarded not necessarily on the fastest run but the impact on the team and performance improvement - an encouragement award.  The recipient will receive a voucher to Baker’s Delight at Hoppers Crossing and Werribee Central.

This week’s ‘Run of the Day’ winners are Matthew Hussey in the U14s, for his win in the 2km event and lifting his team to second place.  For the girls, Monique Harris in the U20 3km, for completing her first XCR and enabling the U20 girls to have a team on the day, and as we have seen in previous years, missing out on points for one event can jeopardise a premiership. 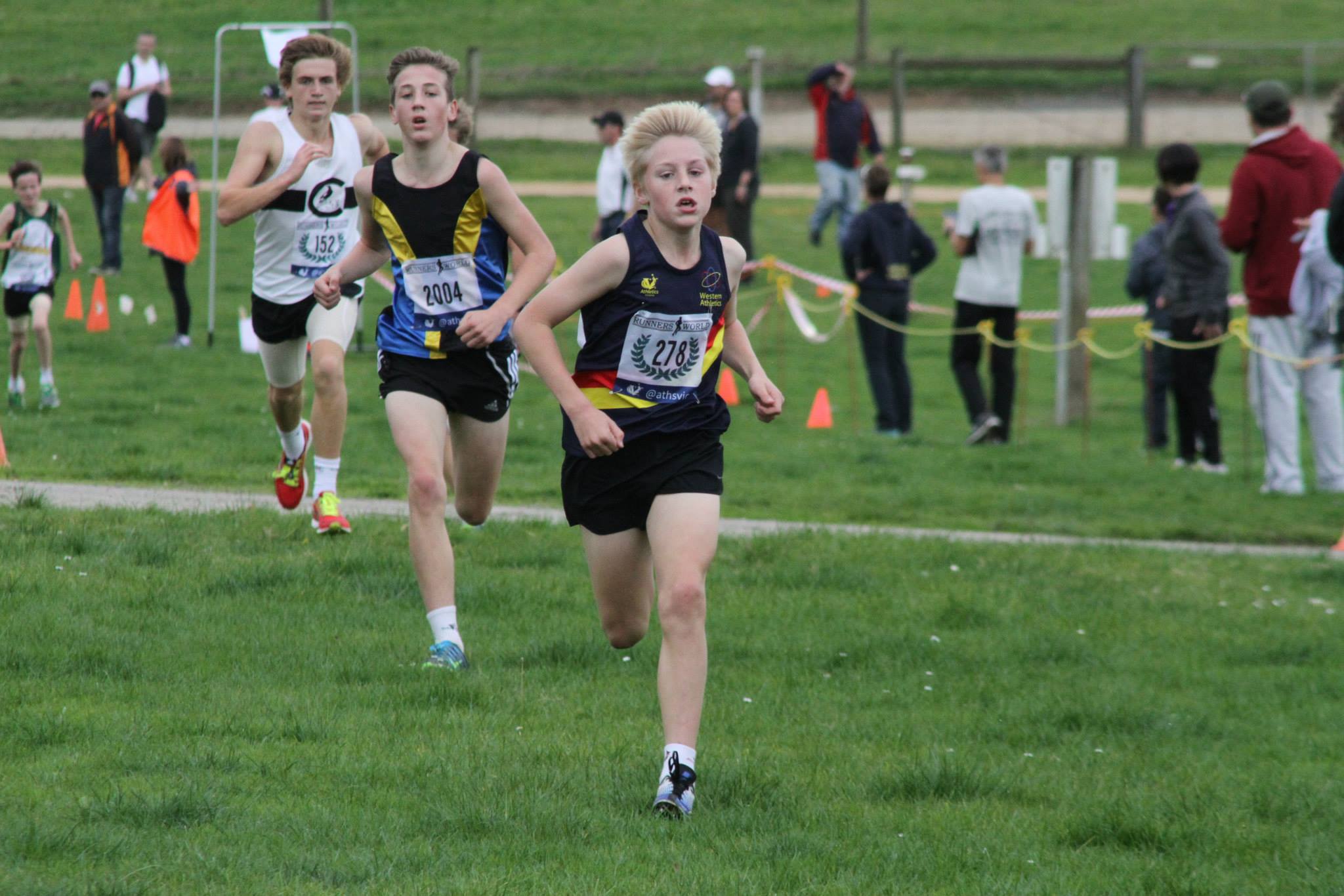 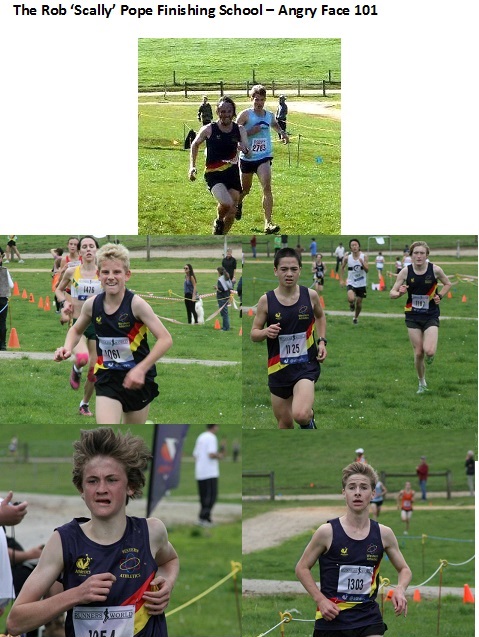 First up, welcome to the many athletes new to Western Athletics and cross country.  In total we had 12 new athletes, some new to cross country, some returned after a break - you all made a difference and had a positive impact to the performances yesterday.  From a pool of 63 athletes we entered 18 teams consisting of 11 men’s teams and 7 women’s team.  It was good to see you all there with plenty of time to spare or communicating with me if you were running late.  Special thanks also to all those who assisted with the success on the day and making it an enjoyable experience, there was lots of positive feedback from the new ones.

We had a brilliant start to the XCR 2014 season, a great start for our opens men’s div 2 team and on the road to promotion to the Premier division in 2015!  Our men’s Div 2 came second, our best result in years, with a large part of the credit going to our strong U20 athletes Jack Rayner, Nathan Pearce and John Camilleri, the fastest of our div 2 athletes.  Also, contributing with some very solid performances, was Michael Masseni, Chris Downie and new recruit Alistair McDonald.  With the infusion of our U20 into Div 2 relay team our Div 4 team also became very strong and they actually won their division by two minutes!  Also experiencing a lift, all other men’s divisions finished in top ten places: Div 6, 6th, Div 7 5th and 10th. 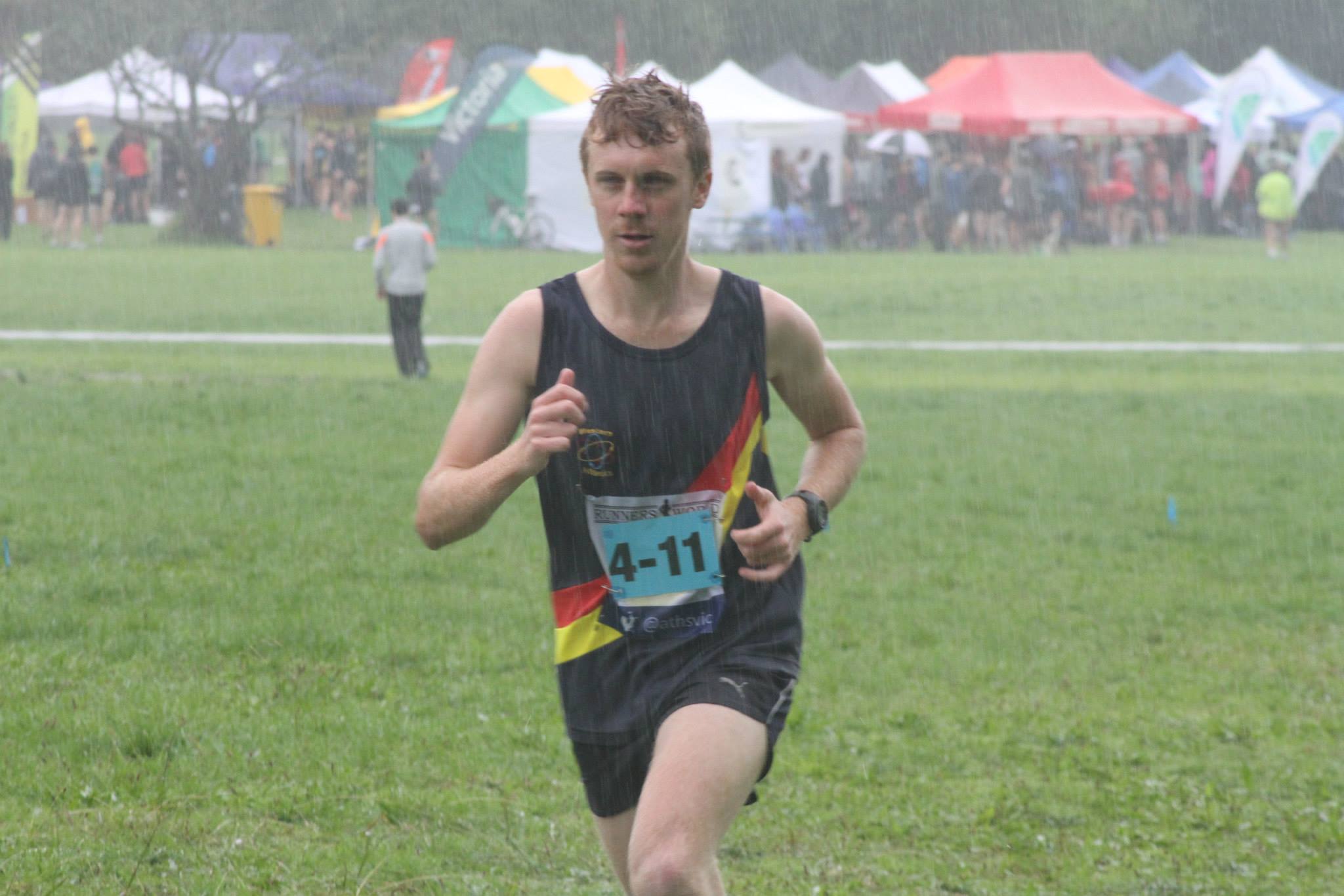 In the Women’s divisions, our Div 2 came 7thwith Brianna Bunworth leading the charge, in what would have to be her fastest ever in the 6km at Jells Park, completing the course in a time of 24.10.  Second for div 2 was Carolyn Huell then Narelle Coady, freshly returned to the club, with Aimee Lane finishing off for the team.  With a last minute change, the women’s Div 3 finished 12th, the invite div 5 team came 11 and the 40+ came 8th.

There were some solid results from our junior teams and a good start in the defense of last year’s premierships.  Our Men’s U18 came 3rd, 8th and 12th, with the fastest of our athletes in the 3km distance, Lochlan Lyness starting for the 2ndteam – a nice surprise!  In the U16 solid runs from all the boys saw them come home in 2nd and in the U14s came 3rd and 6th. 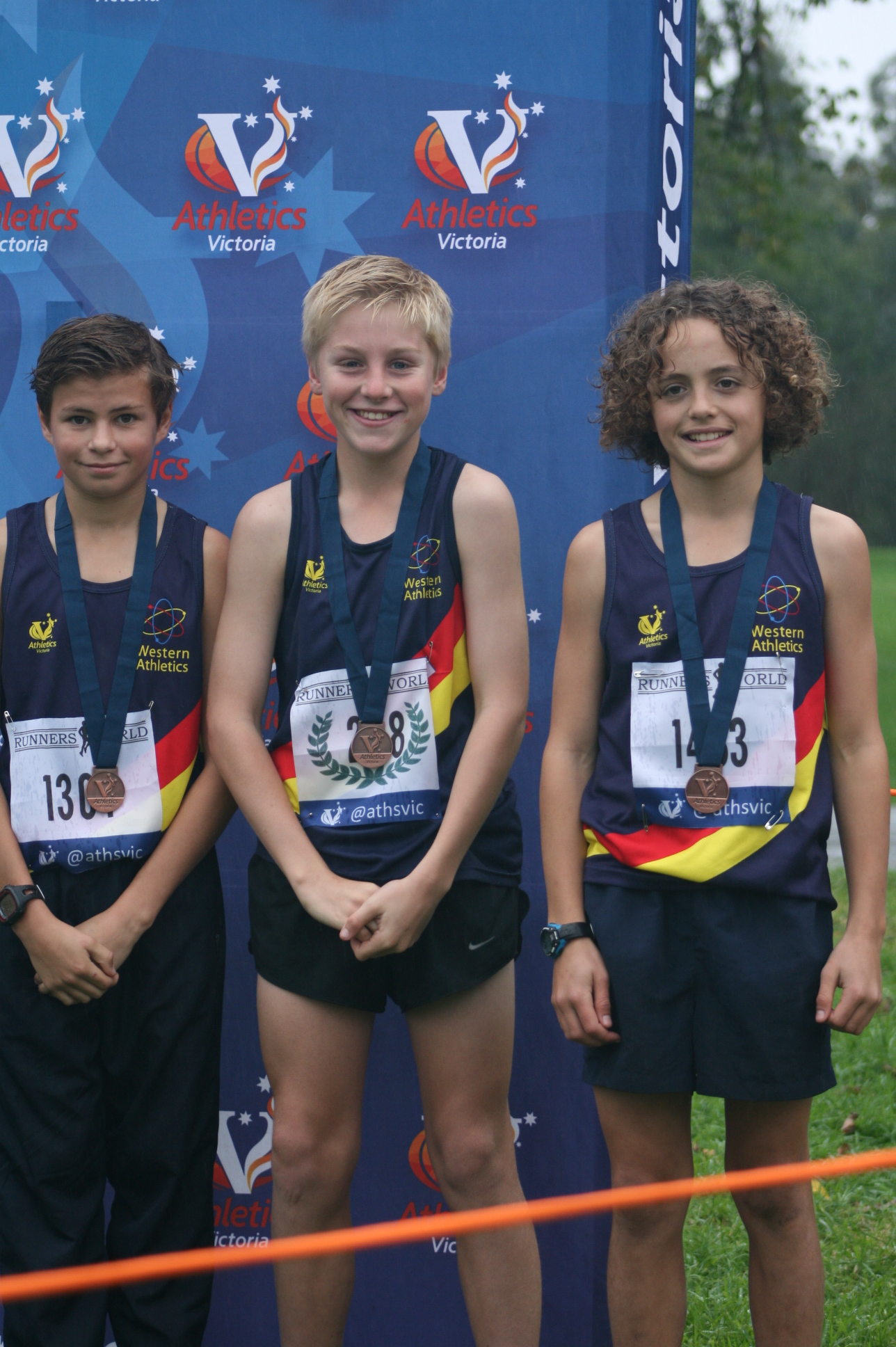 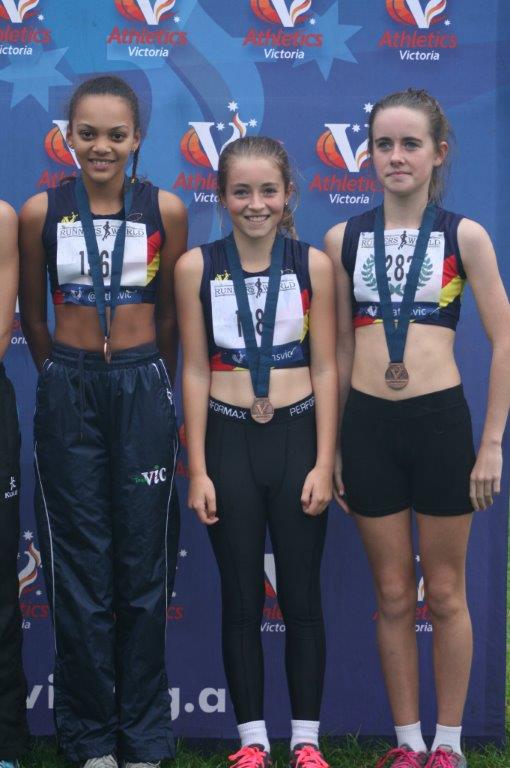 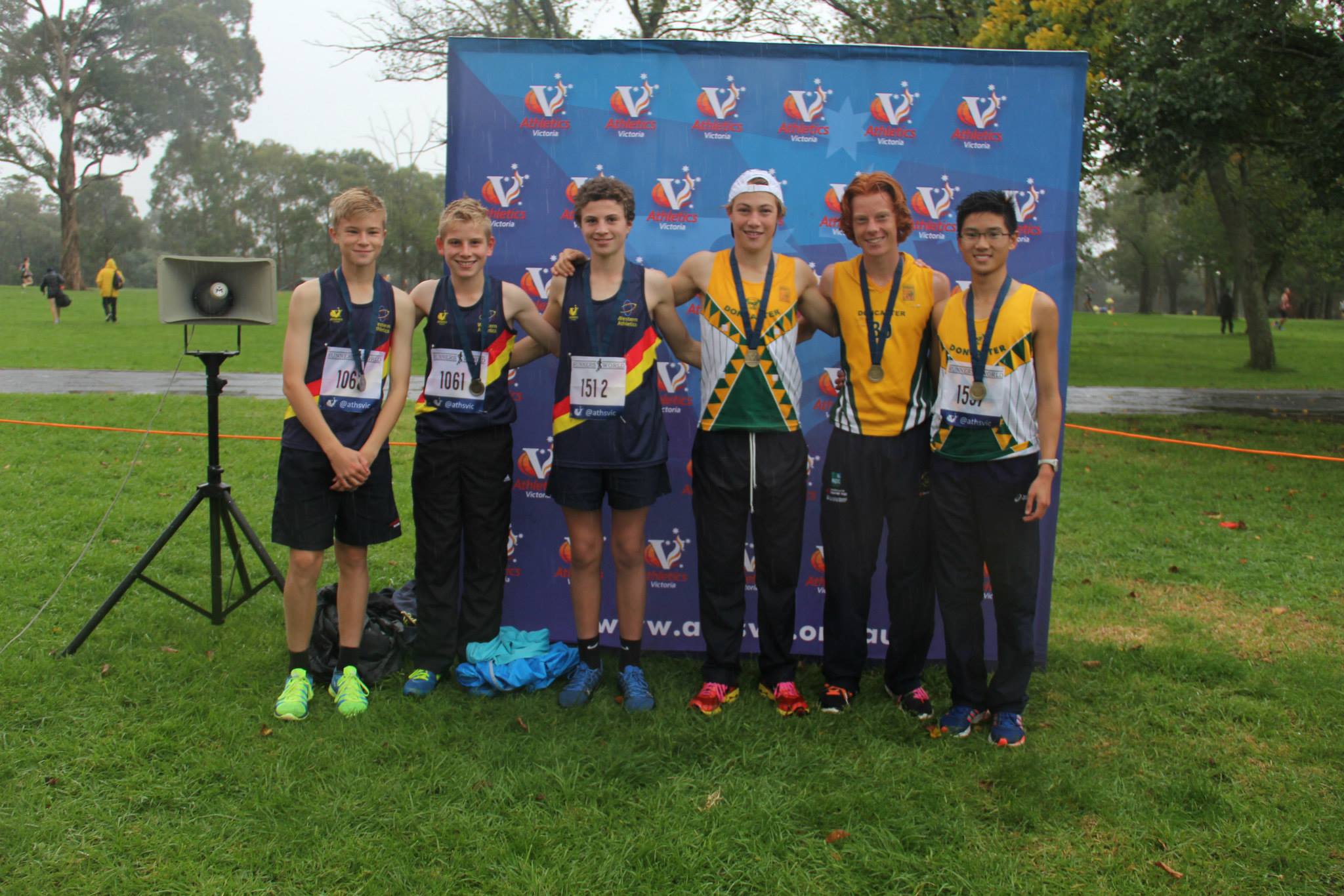 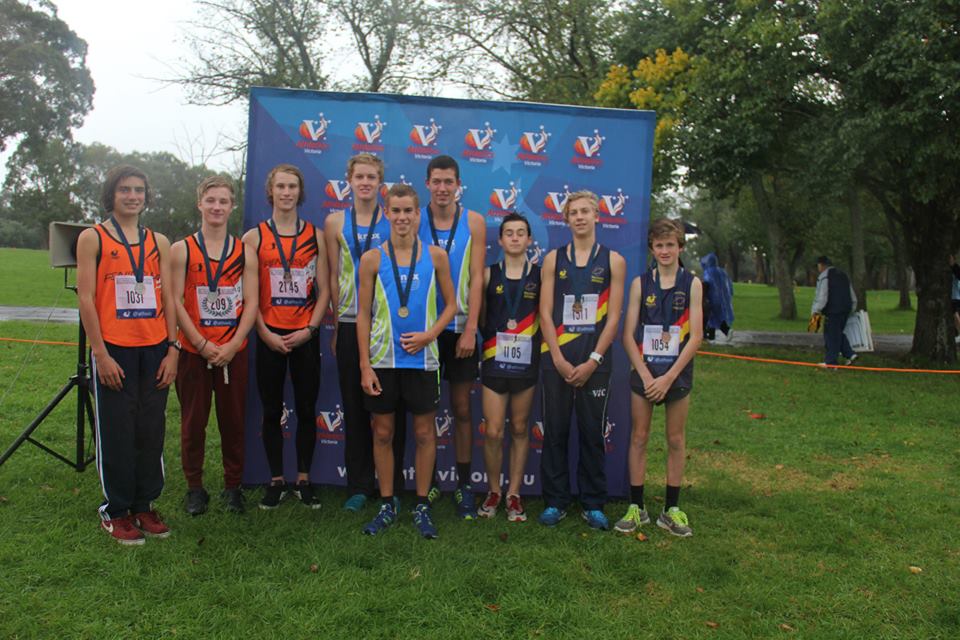 Morgan Mitchell has led the way for up and coming Western Athletics at the Australian Athletics Championships held over the weekend of April 3-6 at Lakeside Stadium, the home of Victorian Athletics. Morgan competed in the 400m and, in the one race became the Australian Champion, posted a B qualifer for the Commonwealth Games and ran a PB winning in a time of 52.22. To say that Morgan was excited would be an understatement. In other outstanding results Julia Burke posted a throw of 13.11m to grab a top six finish still competing as an U17 and mixing it with mores seasoned athletes, the future is looking bright, Luke Stevens in a club equaling record of 10.69 progressed through to the semi finals of the 100m achieving a top ten finish and excluding the internationas a 7th placing, Fernando Canepa throwing 50.76m in the Hammer for a top ten finish, Billie Arch stepped up to compete against the more experienced and older girls in the 400m gaining invaluable experience and Matthew Hargreaves running the 400m after an interrupted preparation.  Working tirelessly alongside and guiding the athletes to achieve their results have been their coaches, Peter Burke, John Henry, Fernando Canepa and John Alchin.

Zatopek:10 was held Thu 12 December at Lakeside Stadium in front of a healthy crowd who were confronted with a pleasant December evening.  Featuring the men’s and women’s 10,000 metre Australian Championships and Commonwealth Games selection trial for Glasgow 2014.  As well our Club had athletes competing in the VAL 70m & 300m events, the 6 person mixed relay and the women's 4x400m relay final.

Well done to all athletes.

We had great season and yesterday’s Tan Relays was a fitting end.  Best results of the day were our Men’s Div 2 finishing second and led by Jack Rayner with 11minutes, 8 seconds and the in Men’s U18, Nathan Pearce led the way with a sensational time of 11 minutes, 33 seconds and, backed up by Daniel Dunstone and John Camilleri, the boys took out the gold medal. 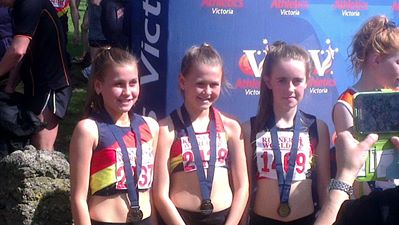 In our Women’s div 2 great runs from Mel Desira, finishing with 14 minute, 51 second (2 minute PB) and fastest of the girls and Loren Lane also with a big PB, with 15 minutes, 9 seconds.  Coming into this round the div 2 were only seven points behind Mentone and would have closed the gap, coming forth, two place ahead of Mentone, not enough to lift into second.  Despite this they are still possible contenders for promotion as first placed Glenhuntly already has a div 1 team, we’ll have to wait and see.  Either way a superb effort from the all the ladies throughout the season.