Rayner wins in augural Commonwealth half 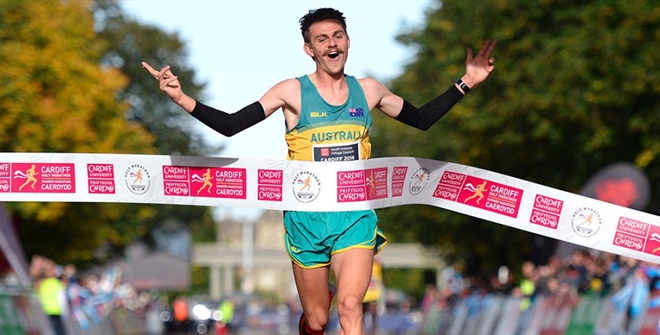 Thank you to Athletics Australia for the following article. Source: http://athletics.com.au/News/rayner-wins-in-augural-commonwealth-half

Jack Rayner has written his name into history with a win in the inaugural Commonwealth Half Marathon Championships held in Cardiff last evening.

Australia appeared on the podium in every event with Celia Sullohern winning silver in the women’s event and the Australian teams second in the men’s and women’s sections.

With a personal best of 63:12 minutes and facing competition from three sub 61-minute Kenyans, Rayner was an outside medal hope.

“I went into the race with no expectations,” Rayner said. But he did have a clear race plan.

“My coach (Nic Bideau) told me to go with the front pack and stick on for as long as possible and kick down in the last 1km. Which is exactly what I did.”

Between 10km and 15km the pace quickened, Rayner himself clocking 14:26.

“There were a few surges throughout the race so as long as I kept contact the pace would ease up in parts.”

The next 5km was a challenge for Rayner as he slowed to 14:52 for the 5km split and at the 20km mark had dropped three seconds behind Musobo.

“Going into the last 4km was the hardest part but with the huge crowds on the street it made it a little easier.”

Rayner hit the finish line in a breakthrough time of 61:01, seven seconds ahead of Musobo, and 16 ahead of Toroitich.

“It’s definitely the biggest race of my career so far,” said Rayner who sliced 2:11 minutes from his previous best.

He also shot up the Australian all-time list from 24th to fifth. It was the fastest time by an Australian for five years and only Collis Birmingham has run quicker in the last 18 years.

In the women’s race Celia Sullohern was making her major championship debut on the road following appearances at the world cross country and Commonwealth Games on the track.

She was very familiar with one of the competitor’s Juliet Chekwel of Uganda. They had developed a rivalry at the Commonwealth Games with Sullohern placing one position behind her in the 5000m and one position ahead of her in the 10,000m.

In Cardiff last evening, Chekwel bolted from the gun and by 5km led the field by 30 seconds. Sullohern was in a small pack of three, Doreen Chesany UGA and Toroitich Linet Chebet UGA, in second position.

Up-front Chekwel took the win in 69:45 minutes, while Sullohern ran on to comfortably take the silver medal in 71:04, seven seconds ahead of bronze medallist Chesany.

The time elevated Sullohern to 13th fastest in Australian history. It obliterated her official personal best of 77:22, although she has run quicker in uncertified half-marathons and at mid-way points in marathons.

Both Rayner and Sullohern lead home a string of Aussies personal bests and a great team performance where they placed second in the men’s and women’s team event.

Silver medallist in the national half marathon, Marnie Ponton (NSW) continued her great form to place sixth in 72:21, a 65 second PB and to move to 18th fastest in Australian history. Adelaide’s Casey Wood was 16th in 75:43.